Arrangement of Electrons in the Atom

The main points in Bohr's explanation of the fact that each element has a unique emission line spectrum are as follows:

The fact that a line spectrum is observed - and not a continuous one - shows that only specific energy transitions are possible within an atom. This is strong evidence for the existence of energy levels. 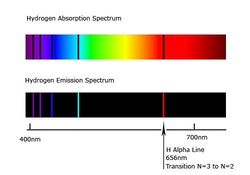 This technique is used to determine the concentration of elements

ENERGY LEVEL:  fixed energy value an electron in an atom may have

On closer examination, the bands of light in an emission spectrum can be seen to consist of two or more lines very close together. This suggests that a main energy level may be made up of parts of slightly different energy known as energy sub levels which are denoted by the letters s, p and d

Wave Nature of the Electron

Although electrons were identified as particles it can also be seen to possess properties associated with waves e.g. shown to have a wavelength. This means they do not travel in a fixed bath at a definite distance from the nucleus

HEISENBERG UNCERTAINTY PRINCIPLE: it is impossible to measure at the same time both the velocity and the position of an electron

AN ORBITAL: is a region in space within which there is a high probability of finding an electron

Erwin Schrodinger used mathematics to calculate regions where an electron is likely to be found. He called them atomic Orbitals

There are three p orbitals in an energy level - px, py and pz. They are arranged at right angles to each other